“Spreeman’s Landing”, a commercial fishing and boat rental business, was established around the turn of the century on a beach that is the present site of the gas dock. Crystal Spreeman sold the property to Bill and Bert Skluzacek in 1956. They renamed the business after the functioning windmill landmark, which is still prominently displayed in front of the marina office. In 1957, the Skluzacek’s built their home on the foundation where the marina office and ships store is housed today.

After three years, dredging was completed on the north harbor, and the marina business started with 13 slips and a few rental-fishing boats. Each winter more slips were added, launching and parking facilities were improved, and rental houseboats replaced the fishing boats. The first gas dock was put into use in 1961.

In 1963, an adjoining parcel of property was purchased, and it took six years of dredging to complete the south harbor. The 1965 flood brought record high water levels and ice flows. Miles of cable and rope lashed boats and docks together. This experience helped “Windmill Bill” and his crew prepare for high floodwaters again in 1969. In 1971, Skluzacek’s moved their home off the original foundation to a nearby location in Afton. 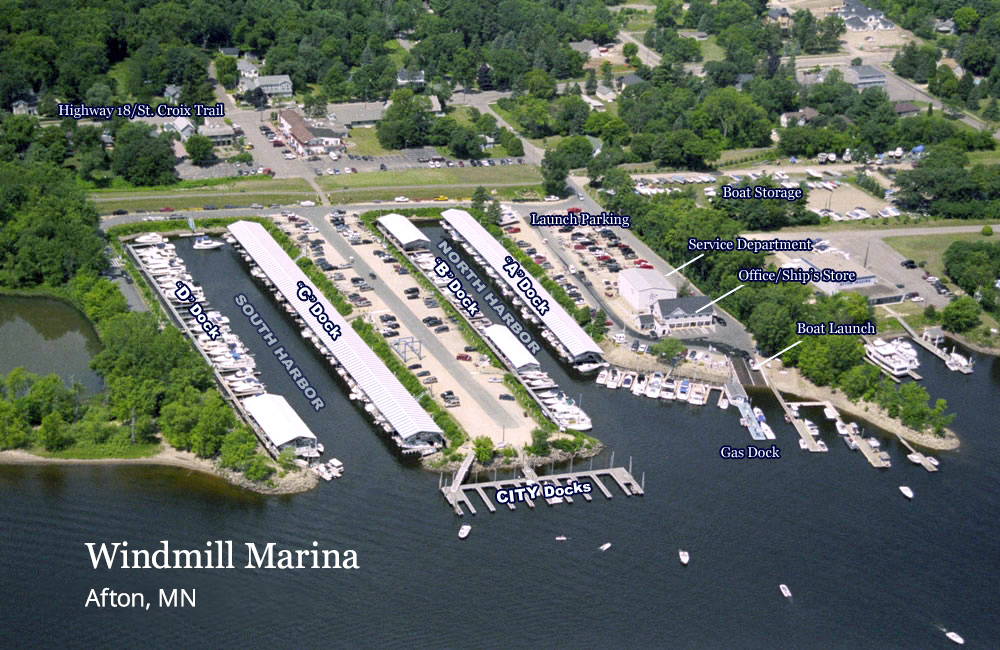 The family business continued to grow, and in 1983 it was sold to the newly established Windmill Marina Association, Inc. Joe Riley, a long-time employee, was hired as the marina manager. The owner’s association quickly undertook improvements to the appearance and operation of the marina. Initial projects upgraded electrical service to the entire marina, blacktopped traffic areas, and repaired and replaced docks where necessary.

Since that time, the marina has seen such major capital improvements as: a new service building, remodeling of the marina office exterior, expansion of the ship’s store, a new shower facility and replacement of the fuel tanks. In 1996, Windmill Marina purchased an additional 3.3 acres of property permitting a convenient Store ‘N Launch service, and completely renovated the launch ramp. Landscaping improvement and dock replacement programs continue to be implemented.
St. Croix River flooding in 2001 brought river levels 17 feet above normal – the worst since 1969.

Despite a completely submerged marina for several weeks, the experience, readiness and dedication of the Windmill Marina staff ensured the minimal damage was sustained. With the passing of its founders, William and Bertha Skluzacek in 2002, the marina lost a precious connection to its history. They created a legacy on the banks of the St. Croix River that, in its 48th year, brings pleasure to hundreds of recreational boating families.

In 2003/2004 the Association moved forward with several major Capital Improvements; including: completion of the C-Dock replacement project, raising the Office & Ships Store out of the flood plain, elevating all electrical panels out of the flood plain and addition of the dock pilings to all docks and boater friendly dock ramps. In September 2004 the Marina Membership dedicated a new nautical flag pole to Bill & Bert Skluzacek.

In 2005 Windmill Marina Association, Inc. was nominated and awarded the 2005 NCMA Marina of the Year Award. The Marina of the Year Award is awarded once every four years. Qualifications for the award include: membership in good standing of North Central Marine Association; exemplary facility, boat slips, and grounds; outstanding customer service; above board business ethics; programs that encourage safe boating and environmental protection; and proactive efforts regarding growth and success of the marine industry.

Windmill Marina provides boat slips, boat storage and public access to the St. Croix River in Afton, MN. Additionally, we provide all mechanical and maintenance services through or boat shop.